skip to main | skip to sidebar

Hello and thank you for visiting Marketing and Social Media That Matters. This blog is no longer being updated but enjoy the archived content and please visit my new home where I continue to blog about B2B marketing and business development on the Mi6 site blog.
0 comments

I'm the co-founder of Silicon Halton, a grass roots member oriented networking group who are passionate about hi-tech in Halton Region. This group consists of 100 people and/or organizations who live and/or work in Acton, Burlington, Georgetown, Halton Hills, Milton and Oakville. There are more smaller and equally important towns in Halton that entrepreneurs and professionals work and live in as well.

Rick Stomphorst and I founded Silicon Halton in October 2009 because, as professionals working and serving in the hi-tech industry, we felt there was a need to have a grass roots "hi-tech movement" that would, at first, focus on finding each other, learning about each other and connecting with each other.

Since October, Rick and I, during our spare time have been working hard (well Rick harder then me!) in making Silicon Halton happen. We've put Silicon Halton "out there" for the world (err....region) to see, judge and most importantly encourage members to evolve it into something they want and need for their businesses and professions.

Up to this point we've been seeing how things went and whether the members see value in building Silicon Halton into something special for them and for the region. I am convinced, based on experience, that grassroots community based initiatives like barcamps, tweetups and meetups combined with social media (exactly what we are doing with Silicon Halton) enable people to establish a collective that can work together to make something happen.

We're only five months in so we're still learning. But there is interest:
The community is starting to become connected!


But, this post is not a progress report (the new Silicon Halton website will have that) it's about friction.

Friction is defined as:

The rubbing of one object or surface against another. Conflict, as between persons having dissimilar ideas or interests; clash.

Recently the term "friction" was used in reference to Silicon Halton in a conversation taking place with an Economic Development person from one of the towns in Halton Region. My first thought was "what?!". However, the more I think about this the more I think this is fantastic! Silicon Halton creating some friction in the region!

Before you call me insane, consider Michael Porter's Cluster Development concept. In developing strong economic clusters friction is a critical condition that needs to be in place for an industry to be vibrant and grow. Friction creates competition, competition forces people and organizations to get better, getting better makes us more successful as people and organizations. (Side note: Thanks to Brad Niblett the CIO of the Michener Institute for drawing this to my attention).

The opposite of friction is complacency so lets keep rubbing together, let's argue, lets compete and lets debate! Let's challenge each other to get better..to build Halton region into a hi-tech powerhouse (I feel that it already is in many ways, we're just starting to find that out...but we have to get better!).

So let's show the world that Halton is a very competitive, innovative and entrepreneurial region that is becoming the global hub for hi-tech and its supportive industries. Friction is good. Let's create some more!

Thanks to:  Rick Stomphorst, Mike Orr and Sonny Jelinek whose words inspired me to right this post.

By the way, our next Silicon Halton meetup is March 23rd in Burlington. While this is a members only gig you're welcome to attend as my guest. Go here for more posts and videos on Silicon Halton. To join Silicon Halton (must have a company in Halton or live and/or work in Halton) sign up here.

I interviewed Rick Stomphorst who co-founded Silicon Halton with me. This is after Silicon Halton's Meetup #3. We chat a bit about how Silicon Halton has evolved since we started it in October. Scott VanDam and Sean Hemraj from Waggware give their thoughts on the value of being a member of Silicon Halton. Thanks guys.

For those who don't know what Silicon Halton is, it is a group of people who are leaders in technology that live and/or work in Halton region. It started as an idea that Rick Stomphorst and I had in October and it's been fun so far. If you want to know more about the group check out our Linkedin Group.

On January 19th we had about 45 people attend. Joining us were Terence Young, MP for Oakville and Rob Burton, the mayor of Oakville. Full credit to Rick Stomphorst for reaching out to Terence and Rob and thanks to both for attending.

At each meetup we have a key discussion activity. This weeks topic was "what will make Silicon Halton successful". Everyone broke into groups to chat about what success would look like a year from now. After about 20 minutes volunteer spokespersons shared what they discussed.

Mike Druiven is a teacher at EC Drury High School in Milton.

Mike Oreskovic a Senior IT Executive Leader, from Milton.

Edward L. Onate, is a Senior Account Manager from Blink Communications in Oakville.

I'd like to personally thank everyone that showed and contributed. Thanks to The Printing House, Boston Pizza, and Nancy Forsyth from UPS Store #342 for your help and hospitality.

Enjoy this photo stream. Special thanks to the talented Vicki Pehar for taking these photos.

Rick Stomphorst and I met at one of the many offices of Silicon Halton (translation: a coffee shop in Halton Region with wifi!). For those of you who are interested in learning more about Silicon Halton here's where we hang our hat in Linkedin.

Watch this quick video to see what's planned for our third meetup on January 19th.

I'm attending my first Tweetup on January 28th. Thanks to Chris Farias, Jen Hudder and Meg Coppolino for putting this together.

If you live in the Hamilton, Ontario, Canada area come and join us!

They are using Twtvite to get the word out and manage registration. It's a slick tool but I would like to be able to quickly scan and learn who is attending as illustrated in the screenshot below. 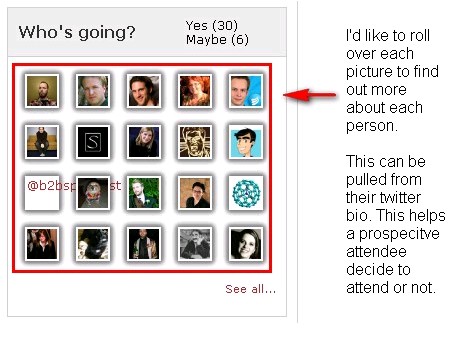 Social media helps people make connections, create relationships and physically network. You can use it to have fun, meet interesting people and generate business. For those of you attending the January 28th Tweetup...see you there!
0 comments

One of the top funniest video commercials I've seen in a while. 796,000 views and counting. Who said all advertising sucks! Enjoy!

Sites and Links by Chris

Read my blog on your smart phone

This work is licensed under a Creative Commons Attribution 3.0 Unported License.